In this month’s Finder RBA Cash Rate Survey, 40 experts and economists weighed in on future cash rate moves and other issues relating to the state of the economy.

While all experts surveyed predict the cash rate to hold, nearly half of those who weighed in on property prices (47%, 16/34) believe Australia’s current house price growth is unsustainable.

Property market growth surged at its fastest rate in 33 years in March, with national dwelling values also increasing by 6.2 percent over the past year according to CoreLogic. Graham Cooke, head of consumer research at Finder, said that some experts are concerned a housing bubble is emerging.

“Rock-bottom rates, government stimulus and a fear of missing out have really lit a fire under the belly of the market," Mr Cooke said.

“Listing numbers are unable to meet high buyer demand, keeping inventory levels low overall and adding to the sense of urgency among buyers.

“We’ve seen more borrowed for housing over the last six months than during any similar period in history – and economists have tipped us to borrow more over the next six.

“However, the view from our panel is that this fast-paced growth will not continue indefinitely.

“It’s unlikely we'll see any regulatory intervention from policymakers yet, but this might be a possibility down the track,” Mr Cooke said.

According to Mala Raghavan of the University of Tasmania, buyers may put themselves at risk by acting too hastily.

“The recent uptick in buying behaviour largely appears to be due to the fear of missing out, and many buyers are rushing into the market without clear foresight of the impending risks," Ms Raghavan said.

“When mortgage rates start rising, many households will risk being unable to service their loans, and could be vulnerable to foreclosures,” she said.

A small rate increase could cost mortgage holders $26,000 in interest

While experts agree the RBA is unlikely to increase the cash rate for a while yet, this doesn't mean mortgage holders can rule out an out-of-cycle rate hike.

UBank announced an out-of-cycle move late last week, increasing its three-year fixed rate from a near market-leading 1.75 percent to 1.85 (an increase of 10 basis points). Westpac also bumped up its fixed-term rates last Friday.

If a homeowner with the average mortgage of $495,420* experienced a rate hike of 25 basis points from the current average variable rate of 4.27 percdent to 4.52 percent, they would need to pay an extra $878 per year.

Finder’s Consumer Sentiment Tracker, a survey of 7,191 mortgage holders, found a monthly raise of $200 or less would cause financial distress for two in five mortgage holders (41%).

Mr Cooke said that while the cash rate wasn't going anywhere, that did not mean home loan rates would stay put.

“The last time the cash rate was held for an extended period of 34 months, banks changed their interest rates on average seven times – five of which were increases.

“It’s important that homeowners factor in potential rate increases when applying for a mortgage – keeping a cushion in your budget can keep your budget from getting dicey down the track,” Cooke said.

Positive sentiment around housing affordability (3%) reached the lowest level ever recorded since the Finder survey began in 2018.

On the other hand, positive sentiment around wage growth is at 32%, which is the highest it's been over the last 12 months. 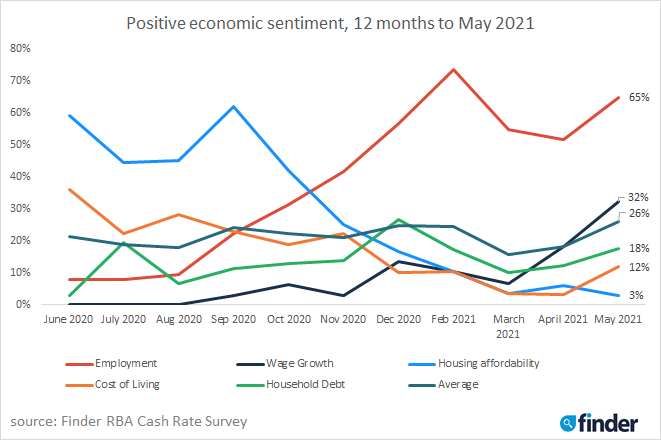 Mr Cooke said there had been an increase in positivity for all but one economic metric over the last quarter.

“Economic sentiment is clearly improving, which is a great thing to see," he said. "The only metric trending down is housing affordability, which, while good news for owners, is bad news for potential first time buyers."

Here’s what Finder's economic experts had to say:

Nicholas Frappell, ABC Bullion: "Conditions will probably shift the timing of a rate rise forward, although it will hinge on wage growth. Lack of wage growth will tend to push rather than tighten back towards 2023."

Shane Oliver, AMP Capital: "While the economy is recovering faster than expected, the RBA is still a long way away from seeing its stated requirements for a rate hike, being a tight jobs market, wages growth well above 3% and actual inflation sustainably within the 2-3% target range. So a rate hike is still a fair way off although I think it will come before the RBA’s expectation for 2024 at the earliest.”

David Robertson, Bendigo Bank: "The RBA will most likely start to tighten policy by an increase in interest rates in early 2023 or late 2022, the timing dependent on the pace and success of vaccination programmes."

Sean Langcake, BIS Oxford Economics: "The labour market recovery has progressed much quicker than the RBA anticipated. But the economy is still a long way from the conditions the RBA have indicated will precede a rate rise."

Ben Udy, Capital Economics: "While labour market outcomes have continued to surprise to the upside the RBA has lowered its view of the natural rate of unemployment so the labour market still has a long way to go before the RBA will be satisfied."

Peter Tulip, Centre for Independent Studies: "Inflation will remain below 2% and unemployment will remain above the NAIRU until 2024."

Mala Raghavan, College of Business and Economics, University of Tasmania: "The cash rate will only start moving upwards when inflation and unemployment rates are comfortably above 2% and below 6% respectively. It might take a while to achieve these targets."

Stephen Halmarick, Commonwealth Bank: "It will take until Q2 2023 or 2024 before inflation is sustainable inside the RBA target range."

Saul Eslake, Corinna Economic Advisory: "I agree with the RBA that it will take some time for unemployment to fall to a sufficiently low level to trigger wages growth fast enough to ensure price inflation sustainably within the RBA’s 2-3% target range - but I suspect that situation may be reached before “2024 at the earliest.”

Craig Emerson, Craig Emerson Economics: "The RBA has indicated it will not increase the cash rate for several years or until the unemployment rate falls to around 4%."

Peter Boehm, director: "It’s steady as she goes for now as far as the RBA's cash rate is concerned. But while the RBA has signalled it will keep rates low for the next two to three years, its hand may be forced if inflation starts to increase. We are already experiencing material house price growth, and now with a shortage of skilled migrant labourers, there is increasing upward pressure on wages. These (and other) factors, if allowed to continue their upward trend, may see interest rates rise sooner than expected."

Angela Jackson, Equity Economics: "While the economy is currently performing strongly, some of the heat from the post-pandemic bounce is expected to dissipate in the second half of 2021, especially given the ongoing border closures. The RBA is expected to maintain its interest rate policy under this scenario."

Mark Brimble, Griffith University: "The economy still requires support and the COVID future is not clear, particularly with problematic vaccine roll out and questions re long term on for quarantine."

Tony Makin, Griffith University: "Australia's interest rate spectrum is ultimately influenced by global factors, most notably US interest rates. Ten year US Treasury rates have risen around 70 basis points since the beginning of the year and will keep rising due to the huge US budget deficit and higher expected inflation. The RBA will be unable to stem this tide."

Tom Devitt, Housing Industry Association: "After a short term burst in activity in 2021 and maybe 2022 as a result of fiscal stimulus, home building and households exploiting their accumulated savings, Australia's economy will still be affected by the same factors that suppressed interest rates, inflation, wages, productivity and economic growth pre-COVID. This includes a world awash in savings, ageing populations and limited private sector investment opportunities. And now we have the addition of suppressed population growth. Even if the government exploits its record-low borrowing costs to invest in the necessary long term infrastructure and reforms, it will take a number of years to get the labour market tight enough to generate the wage growth that will force the RBA's hand on interest rates."

Alex Joiner, IFM Investors: "The RBA will look through any near term inflation and once the stimulus acceleration in growth fades the economy will still be away from full employment - the RBA will have to keep policy accommodative."

Michael Witts, ING Bank: "The timing of the RBA is uncertain, the first half of 2023 is possible at this stage, although the strength of the domestic recovery may see this timeline move forward."

Leanne Pilkington, Laing+Simmons: "While there have been some concerns raised recently about rising house prices and therefore household debt, low rates remain an important foundation for the economic recovery and we believe it's prudent for the Reserve Bank to maintain the course it has previously stated."

Nicholas Gruen, Lateral Economics: "The recovery will be strong and will stimulate some inflation, though it will take some time for it to materialise and longer for it to work its way into expectations."

Mathew Tiller, LJ Hooker: "The RBA has continued to indicate that it will keep the cash rate steady for the time being. This is despite improving economic data and very strong increases in dwelling prices."

Michael Yardney, Metropole Property Strategists: "The RBA has made it clear it won't increase interest rates until unemployment is so low that we get consistent wages growth."

Julia Newbould, Money magazine: "If the economy continues to grow and unemployment stays relatively low the bank might start to increase rates to combat inflation and perhaps cool the property market."

Susan Mitchell, Mortgage Choice: "The economic recovery is supporting remarkable growth in consumer sentiment and we’re seeing record growth in the housing market but we are a long way off any changes to the cash rate. RBA board members were clear in the minutes of the April monetary policy meeting - the cash rate will not be increased until inflation is within the target range, wages growth improves and the labour market strengthens."

Rich Harvey, Propertybuyer: "I think the RBA will move rates up sometime in 2022 as the economy is rebounding faster and stronger than anticipated with stimulus money flowing through and commodity price giving the terms of trade a nice boost,"

Matthew Peter, QIC: "Although headline inflation will lift this quarter and next, most of the rise will reflect transitory effects which the RBA will look through. Core inflation rates will remain low, reflecting low wage growth, and the RBA will keep forward guidance for a first rate hike in 2024."

Cameron Kusher, REA Group: "RBA have their credibility on the line and they will choose to wait longer to be sure that they achieve their inflation and full employment targets. That is still likely to take some time."

Christine Williams, Smarter Property Investing: "The global market will eventually move once the Pandemic is under global control."

Jonathan Chancellor, Urban.com.au: "There's no prospect of any official cash rate move for many months, but home borrowers can expect more increases to long-term fixed rates as banks prepare for the end of the RBA's term funding facility."

Dale Gillham, Wealth Within: "The economy is starting to move in the right direction. However there is still a long way to go with combating COVID and getting back to what is a normal economy again. Therefore we are unlikely to see major growth at a level that is enough to warrant an increase in interest rates."